If you perform aggregations on your ASO cubes and you have enough resources on your server to allocate more than one processor then, by all means, change the CALCPARALLEL setting in your essbase.cfg file to a number higher than the default (2). Be sure to heed the recommendation to increase your ASO cache as each thread you allocate to the aggregation requires its own amount of cache.

If you were to go by the DBA Guidelines for cache (32MB of cache for each 2GB of input data) you would need 64MB of cache if you wanted to use the default number of threads when aggregating a 2GB ASO database.

Let's see how this translates to the real world.

Hang on, if you read further down the page you see:

<scratching head>So do I need to allocate 512MB per thread or is that in total? My guess is that's in total.

Once again, Let's see how this translates to the real world.

Let's just test it out and see the performance based upon a bunch of different settings. My CALCPARALLEL is set to 16 in this case.

Here's the MaxL script I'll use:

The table shows the cache size and respective aggregation process time. Each time 13 views were created. As you can see on the graph, there is a diminishing return after about 164 MB. That's well below the recommended 20% or 512MB guideline. 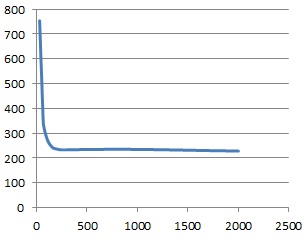 Graph: Time in seconds is on the y-axis, cache size in MB is on the x-axis.
Posted by TimF at 7:36 PM